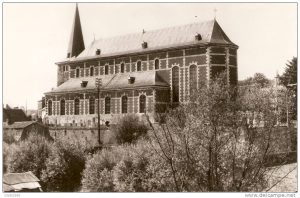 At a time when the textile industry was flourishing throughout the region, thistles were cultivated in a special way. Once dried, they were sold to textile manufacturers to create luxury “woollen” fabrics. Soiron has been able to preserve this magnificent heritage. It sits proudly in the middle of the village’s unnamed streets and alleys and next to several buildings preserved in the local Mosan style of the 17th and 18th centuries.  Blending brick and sandstone or limestone, these dwellings give the village a beautiful, gentle harmony complemented by the surrounding landscape of orchards and hedgerows.

In the centre of the village, the imposing 18th century Saint-Roch church is listed and seems quite out of proportion for its location! It was, in fact, rebuilt around the out-of-the-ordinary high altar of the Boneffe Cistercian Abbey. A presbytery and two castles complete this majestic procession. The first castle, the one of Soiron, dates from the early 18th century and is in the style of Louis XV; the second, Sclassin Castle, dates from the late 16th century. The picturesque character of the village is accentuated by the presence of small heritage features: crosses, religious niches, a washhouse, an old brewery. A marvellous discovery!

Soiron: a green cauldron of bocage

An undulating refuge of grassland and orchards sprinkled with hedgerows, Soiron sits in the cosy nest of a valley shaped by the clear waters of the Bola.

Soiron: in the land of thistles

A green refuge of groves, orchards and grasslands in the hollow of a valley watered by the clear waters of the Bola, Soiron is discreet but not forgotten.

Unusual tour: In the heart of the Pays de Herve and Vesdre

As you travel through the Pays de Herve and Vesdre, explore the landscapes and the remarkable built heritage of the region's 4 beautiful villages.