A jump in time 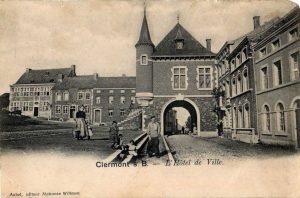 The first thing you notice about Clermont-sur-Berwinne is the welcoming nature of the village, standing in the middle of meadows surrounded by hedges and fruit trees. Then, as you walk along the cobbled streets, the heart of Clermont is revealed: between the square and the narrow streets, the simple and elegant houses of varying architectural styles are concentrated around the listed church. On the Place de la Halle, centuries of history are watching us. One of the attractive features of the village is the Town Hall, built in the late 19th century. It is made of stone and brick and has a novel feature: its pepper pot tower.

At the corner of the church, the porch and the defensive tower, vestiges of the farm castle built in 1635 wink at us. The roofs are not to be forgotten with their decorative slates. The whole forms a harmonious ensemble. A short distance from the village, in a bocage setting, the Crawhez Castle and the Aguesse Castle Farm will lead you to the old 38 line, now converted into part of the Ravel. A discovery tour guides you through the village’s heritage.

Clermont-sur-Berwinne: in the heart of the Pays de Herve

Dear visitors, as you look out over Clermont from its 17th-century church, don't you get dizzy at the sight of all those pretty weather vanes in the sky?

In Clermont, you can plunge into the unique landscape of the Pays de Herve with both feet.

Unusual tour: In the heart of the Pays de Herve and Vesdre

As you travel through the Pays de Herve and Vesdre, explore the landscapes and the remarkable built heritage of the region's 4 beautiful villages.

This fascinating museum is among the most interesting of its type. The Remember Museum opened its doors on 12th June...