A heritage to discover 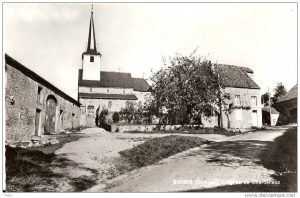 Nestled in a green landscape made up of “ridges and valleys”, the village spreads out gently towards the hollow of a valley where a stream flows. Chardeneux, meaning “Land of thistles”, has preserved its old houses and typical farms from the 18th and 19th centuries. The houses built of limestone rubble with slate roofs are joined together and form picturesque little streets. The beautifully flowered façades give the whole area a restful, rural feel in summer.

Overlooking the village, the very pretty Chapel of the Nativity of the Virgin, in Roman style, and its octagonal spire flanked by four bells leads you to the square in the heart of the village. Another remarkable building is the former Court of Justice, composed of imposing 17th, 18th and 19th-century limestone buildings grouped around a courtyard intersected by the roadway.

The small stream here is crossed by a special bridge, the Pont-Lavoir. Built in the early 19th century, it has a staircase leading down to the water. It allowed the washerwomen to go down the stairs to do their laundry.

The architectural unity of the village and its romantic atmosphere make it a must-see place to visit.

CONCOURS PHOTOS «Regards sur la Lorraine» - AND THE WINNER IS …