A village amongst nature and history 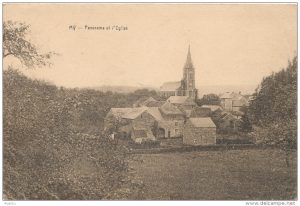 It’s along a splendid stretch planted with hundred-year-old plane trees that the peaceful village of My comes into view. In the background, the surprising and majestic Wibin-Gillard castle farm dating from the 18th century imposes its power and belonging to the seigniorial era. In the heart of the village, a king awaits you, planted in the middle of a small square: a monumental old lime tree with a split trunk gave its name to the village’s main street. This age-old tree faces the old school dating from 1840. Still alive today, it spreads the children’s laughter through the quiet narrow streets. The Rue du Vieux Tilleul has several limestone houses built mainly during the 18th and 19th centuries. They are a sign of the typical architecture of this Calestian region.

The church of the Assumption of the Virgin Mary, built of brick, stands out in the landscape. A little further on, the Gillard square farmhouse with its superb tower-porch, a former dependency of the castle, is further evidence of the importance of My a few centuries ago. Other treasures remain hidden here and there: a wrought iron lamp post and a cast iron water pump from the 19th century, still feeding seven limestone troughs where animals came to drink.

FOCUS: The Romantic Walks of the Most Beautiful Villages of Wallonia, it was this weekend in Limbourg! A look back at the event!

The romantic walk organised on Saturday 18 June in Limburg brought together no less than 270 participants. A look back at the event!

Back to the inauguration of the Place Saint-Georges in LIMBOURG

On Saturday 18 June, the magnificent St. George's Square was inaugurated in Limburg's beautiful village. A look back at this beautiful afternoon!

Circuit "Six steps towards Art between Samson and Lesse": "The HEART of FALAEN", imagined and realized by the artist Elbe, alias Laurent Berbach, has just found its place in the "heart" of the village of Falaën!