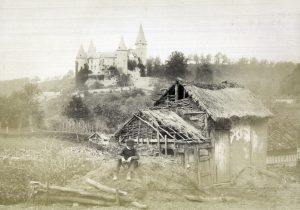 Perched on its rocky spur, the Château de Vêves has dominated the valley of the village of Celles for almost 800 years. This remarkable medieval limestone castle has remained in the same family since its foundation in the Middle Ages!

The result of several construction campaigns, its origin dates back to the 13th century. Standing on its natural base, the castle is spiked with six circular towers pointing their slender roofs to the sky. At its feet is the carpet of gardens that flow in terraces. It exudes a charming atmosphere!

With its magnificent towers and woodwork, the Château de Vêves seems to have come straight out of a fairy tale. It is considered to be one of the most beautiful medieval castles in Belgium and is included in the exceptional heritage of Wallonia.