A village between water and gardens 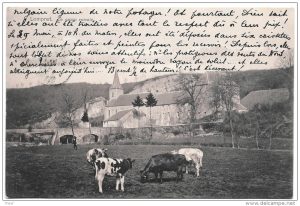 Between two steep hillsides covered with maple groves, the Eau Blanche flows as mistress of the area, embracing the small village of Lompret in its pure meander. Everything is natural here, and the village is nestled in this setting of greenery and the rugged limestone cliffs of the “Franc Bois“. Occupied a long time ago by the Gauls, then the Romans, the village was built on the traces of an ancient feudal castle of which only a few ruins remain today. The long limestone houses from the 18th and 19th centuries are resting on a wide avenue, not far from the parish church of St. Nicholas. A magnificent 18th century bridge links the two.

The serenity of the place invites you for a stroll, an opportunity to discover a prestigious natural site that constitutes one of the jewels of our Walloon heritage: the presence of one of the rare native yew reserves. A legend recounts that any Roman soldier who died in a foreign land had to be buried with the yew berry taken from his native country to benefit from eternal rest. But that doesn’t matter, a good local “Escavêche” (local fish dish) savoured in the village restaurant will allow you to think about it.

FOCUS: The Romantic Walks of the Most Beautiful Villages of Wallonia, it was this weekend in Limbourg! A look back at the event!

The romantic walk organised on Saturday 18 June in Limburg brought together no less than 270 participants. A look back at the event!

Back to the inauguration of the Place Saint-Georges in LIMBOURG

On Saturday 18 June, the magnificent St. George's Square was inaugurated in Limburg's beautiful village. A look back at this beautiful afternoon!

Circuit "Six steps towards Art between Samson and Lesse": "The HEART of FALAEN", imagined and realized by the artist Elbe, alias Laurent Berbach, has just found its place in the "heart" of the village of Falaën!

Discovery Tour: in the Land of Lakes