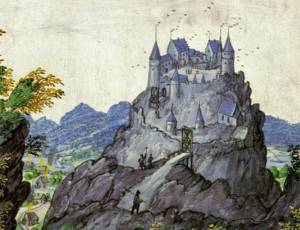 Like an eagle’s nest, the ancient fortress of Samson stands on an imposing rocky promontory above the confluence of the Samson and the Meuse.  Occupied by our ancestors since ancient times, the spur was fortified militarily from the end of the Roman era, as evidenced by archaeological finds of Roman substructures and a Merovingian cemetery.

Today, only a few remains of the prestigious fortress remain. Two towers, together with a remnant of the wall, are still visible from the entrance to the valley. Like Poilvache, Bouvignes and Montaigle, Samson was one of the castles of the Count of Namur. It was the seat of the bailiwick of Entre-Meuse-et-Arche, which extended over 20 kilometres from the right bank of the Meuse to the Arches forest, between Namur and Huy.

Benefiting from the natural protection afforded by the rocky escarpment, the defensive site of the fortress was divided into three: a first enclosure made up of walls enclosing a large courtyard, a second enclosure containing the bassecour and outbuildings and finally, beyond a drawbridge, the third enclosure, the seat of the lordly residence, and its keep.

In the 9th century, the fortress withstood the assaults of the Normans. During its existence, the castle suffered other sieges, the last of which took place in the 16th century, during the time of Don Juan of Austria. Due to the lack of sufficiently strong defences against cannon fire and competition from the citadel of Namur, the ancient fortress was finally demolished by order of King Charles II of Spain and the Netherlands in 1691. It was used as a stone quarry for the construction of many buildings in Thon and Samson.

The site of the former fortress cannot be visited.