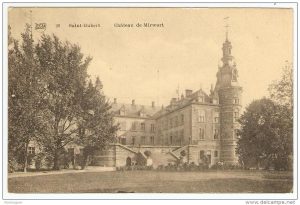 On a rocky promontory overlooking the Lomme valley, somewhat removed from the village, Mirwart Castle has developed on the basis of an early 11th century fortress.

Although it remained modest for a long time, it was between 1706 and 1734 that the castle acquired its current appearance, combining its past defensive role with its new status as a pleasure residence in vogue at the time.

Established in a “U” shape with one side open to the landscape, its quadrilateral plan with corners guarded by four cylindrical towers evokes distant medieval fortifications. In the 19th century, the harshness of the architectural expression was softened. One tower was raised, softening the rigorous symmetry of the whole. A series of elaborate dormer windows crown the sumptuous roofs. The towers have facetted roofs, topped with lanterns punctuated with ironwork.

Acquired in recent years by a renowned Belgian architect, the castle, whose interiors had been badly damaged by successive looting, has undergone a major restoration campaign which has recently enabled it to regain all its former splendour!

Some photos of Mirwart Castle