The pearl of the Haut-pays 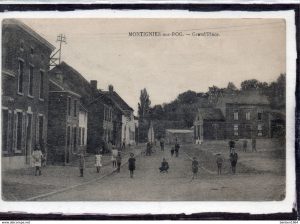 The undisputed charm of the location, its old stones and its paved roads take us back to the olden days. Montignies-sur-Roc owes its name to its location: on a rock overlooked by the church, it stretches along both banks of the Petite Honnelle and is crossed by the Roman road that joined Flanders to France, just a stone’s throw away. Montignies is structured around a square richly planted with lime trees and remarkable plane trees. This vast, triangular, grassy square, Place Masson, zigzags its way towards houses in the Tournai style. Some white, some red, some a manor house or a traditional building, they are characterised by alternating stones and bricks around the bays.

Not far away, the castle of Motte Baraffe in classical style, built at the end of the 17th century, the old windmill, the church of Notre-Dame and its artificial grotto… all of which keep us diving into the past. Multiple paths and old stairways join the bottom to the top of the location. An artisanal village in the heart of the Natural Park of the Haut-Pays is also an ideal starting point for hikers.

On 16 and 17 September, discover "SAINT-REMY-GEEST A COEUR OUVERT", recently awarded the label, and discover the village's heritage and its inhabitants!

The "Fête à l'Ancienne" in the beautiful village of Laforêt is this Sunday, August 21! The villagers, in period costume, will gather around old trades!

Starting from the charming village of Montignies-sur-Roc, this route winds its way through the valleys of the Petite and Grande Honnelle.

Montignies-sur-Roc : the pearl of the Highlands

Located in the Hauts-Pays Natural Park, the village owes its name to its location on a rock dominated by the Notre-Dame church.